framery is back in stock. get in touch for more details. 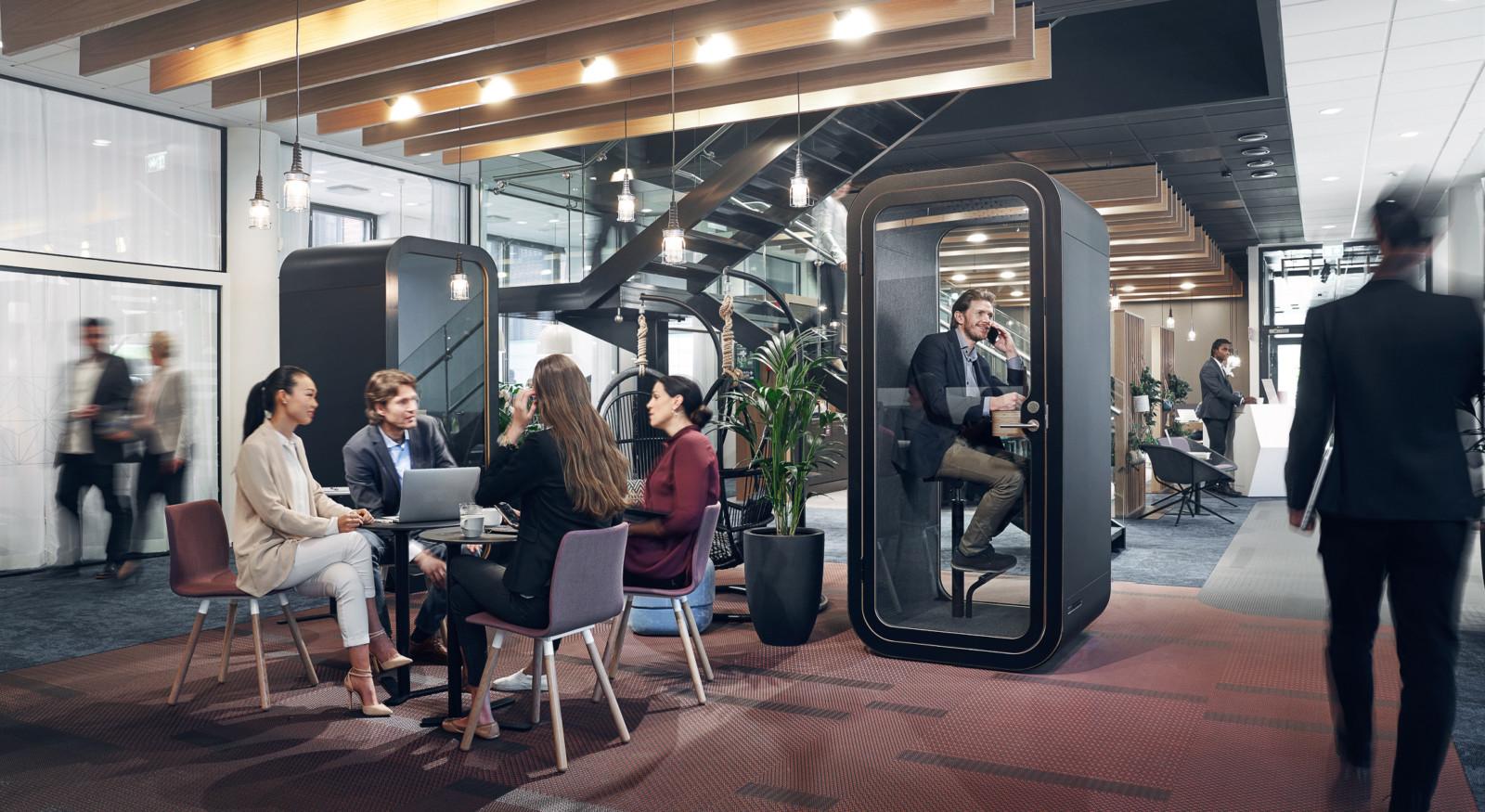 ISO 23351-1: a new industry standard that accurately measures the level of sound insulation of acoustic pods. It proves that Framery’s products are the best in the market in regard to sound insulation.

Until recently, there was not a suitable way to measure the level of sound insulation of enclosed spaces, such as acoustic pods. The new ISO 23351-1 standard accurately measures the level of sound insulation of furniture ensembles, including semi-open and closed pods. It produces a single figure called speech level reduction (DS,A) that describes the degree of speech privacy the product being tested provides.

Turku University of Applied Sciences recently completed a study in which the speech level reduction of Framery O and ten other best-selling phone booths in the market were measured through this new industry standard.

‍The study proves that Framery O has the highest level of performance of all the tested pods with a speech level reduction of 30.3 dB.

Alongside Framery, other manufacturers in the study included: Frem, König+Neurath, Martela, Mikomax, MuteDesign, Narbutas, ROOM, Sedus, Silen and Vetrospace. The “announced figures” listed out in the table above are the dB numbers that the listed companies use publicly on their website or materials to describe their products’ acoustic performance. The DS,A figures to the left of the announced figures demonstrate the lack of accuracy in the numbers reported by brands before the new standard was released. The results were analyzed to further the discussion of the practical significance of speech level reduction and properties of pods that influence sound insulation.

Various standards and ratings have been used in the past to describe the level of sound insulation of phone booths and meeting pods, making it difficult to compare products without testing them. An “apples to apples” comparison of figures has not been possible, until now. The new ISO 23351-1 standard makes it much easier to choose the right product for your needs. Having a standard in place now simplifies the process and ensures that the customers will be happy with their product because they’ll know exactly what to expect! ‍‍

“Transparency and happiness are at the core of what we strive for at Framery, so having a new standard that further ensures customer satisfaction through those ideals is really exciting for our team,” says Lasse Karvinen, Head of Products at Framery. “We’re honored to be part of this progressive step in acoustic testing and are looking forward to all of the industry research and new discoveries to come.”

In order to get the optimal use of pods, they must be placed close to users in the middle of an office. Pods have to provide a certain level of sound insulation so that the people working next to them will not be able to overhear discussions that are being had inside the pod and vice versa. This is especially true for single-person pods that are used on-demand because their use depends on them being readily available.

Until recently, there was not a suitable way to measure the level of sound insulation of enclosed spaces, including acoustic pods. Quantities like sound reduction index (R) and sound transmission class (STC) have been used, but they only describe the ability of a single component, such as a wall, to reduce sound passing through it. In North America, ASTM E596-96 has been used before to determine noise isolation class (NIC) figures for pods, but unlike ISO 23351-1, it doesn’t put emphasis on the sound spectrum of speech, and because of that, NIC isn’t as good of an indicator for speech privacy as DS,A.

ISO 23351-1 was released by ISO, an independent, non-governmental international organization with a membership of 165 national standards bodies. Through its members, it brings together experts to share knowledge and develop voluntary, consensus-based, market relevant International Standards that support innovation and provide solutions to global challenges.

Specifically, the testing method of ISO 23351-1 was developed by Valtteri Hongisto and his team from Turku University of Applied Sciences. Framery supported the development of the new standard by sharing lessons learned during the history of the company and providing resources for the validation of the testing method. This included shipping a Framery O to ten acoustic laboratories across Europe to ensure that test results were in line with each other.

For more information, please check out the Turku University of Applied Sciences study.

How many pods do I need?

Where should I place the pod?

We recommend locating our pods and office phone booths centrally, close to where people are working so it is easy to check whether the pod or phone booth is occupied and is easy to access.

How good is the sound insulation?

The sound insulation of our products is so good that they can be placed next to workstations in the middle of an office and those working next to the pods will be unable to overhear the discussions held inside them. We recommend that prospective customers try for themselves, it’s always a pleasant surprise. 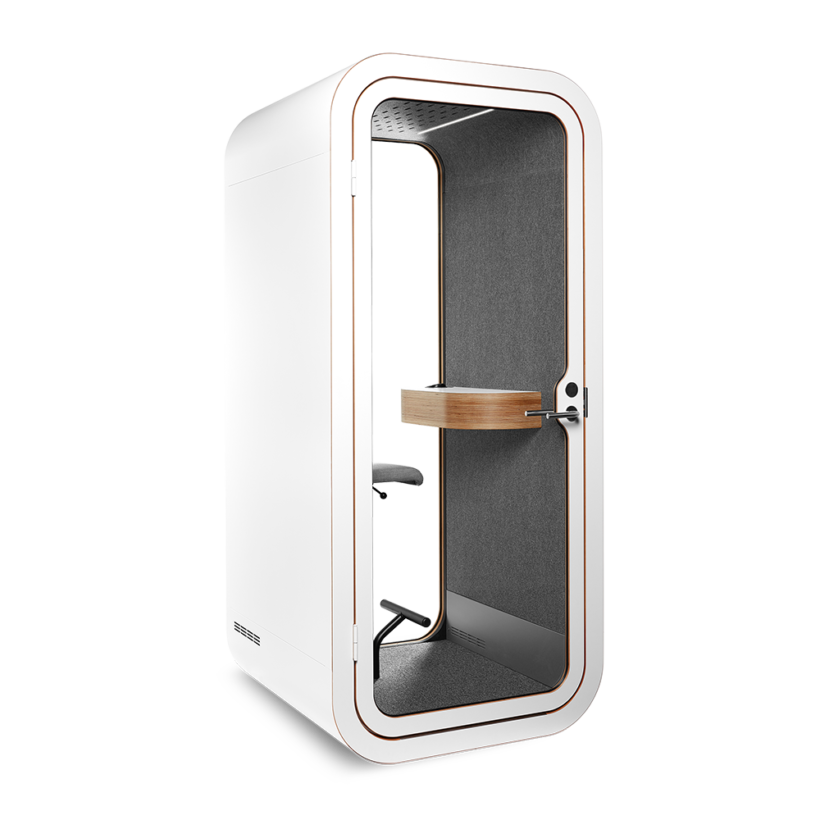 Framery O is ideal for important calls or video conferences. Have your discussions in privacy without disturbing your colleagues. The pioneering office phone booth delivers an echo-free and comfortable working environment. Installation is fast and the pod is ready to be used the same day it’s delivered. 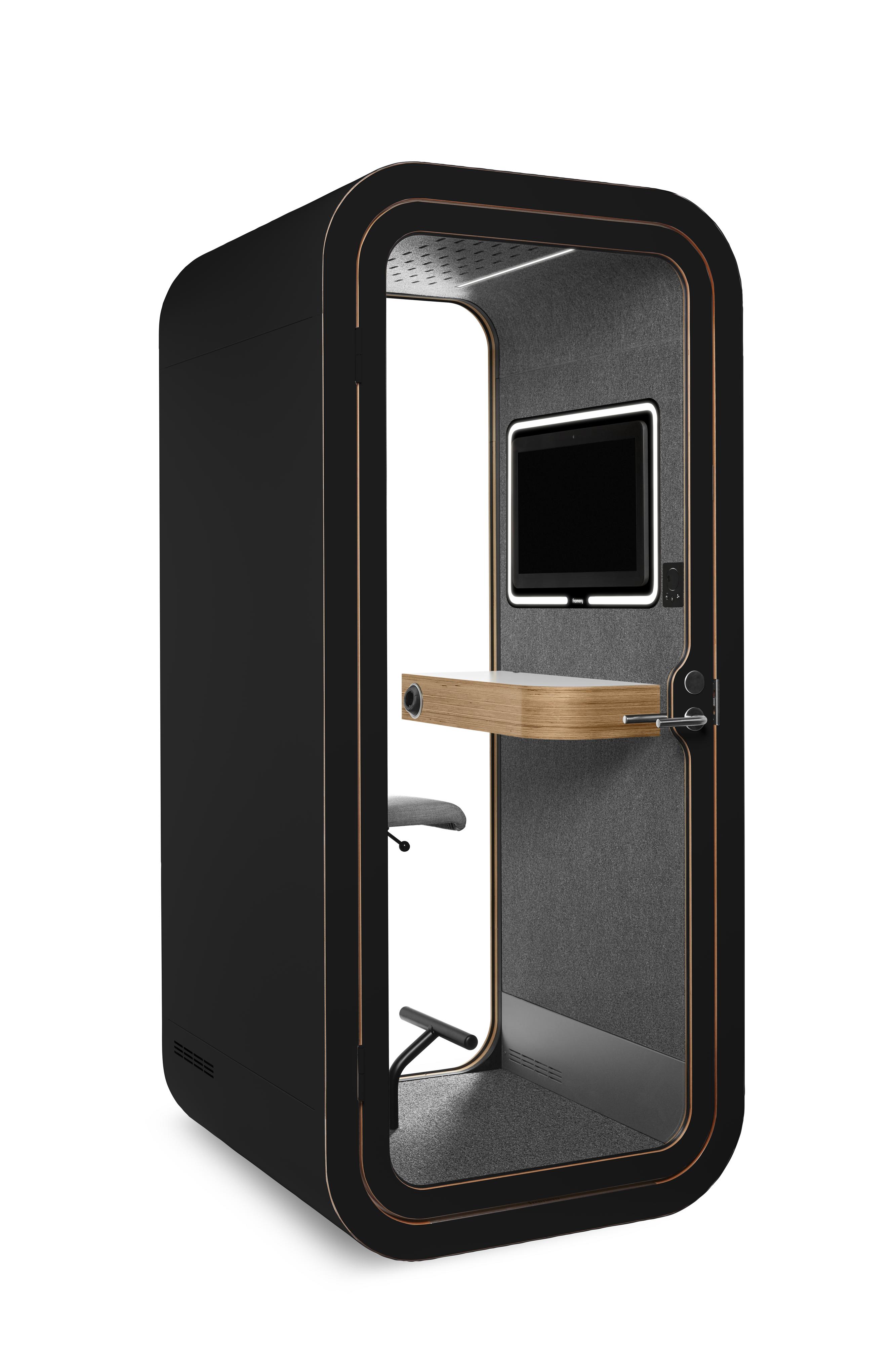 Framery O is also available in the Video Conference Ready variant. A tilting screen bracket and the LED lighting surrounding the screen provide optimal conditions for video conferences, with the control panel enabling you to adjust the lighting and airflow inside the pod. 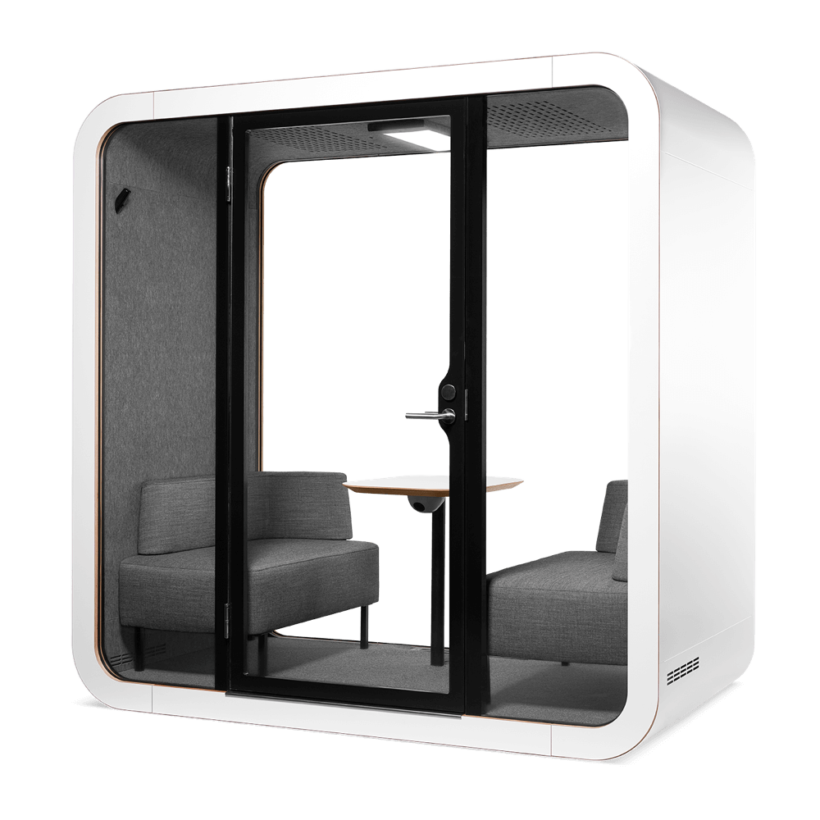 The Framery Q office pod is a perfect, soundproof place for people to have meetings, brainstorming sessions and important one-on-one conversations in private without disturbing the whole office – or the office disturbing you. 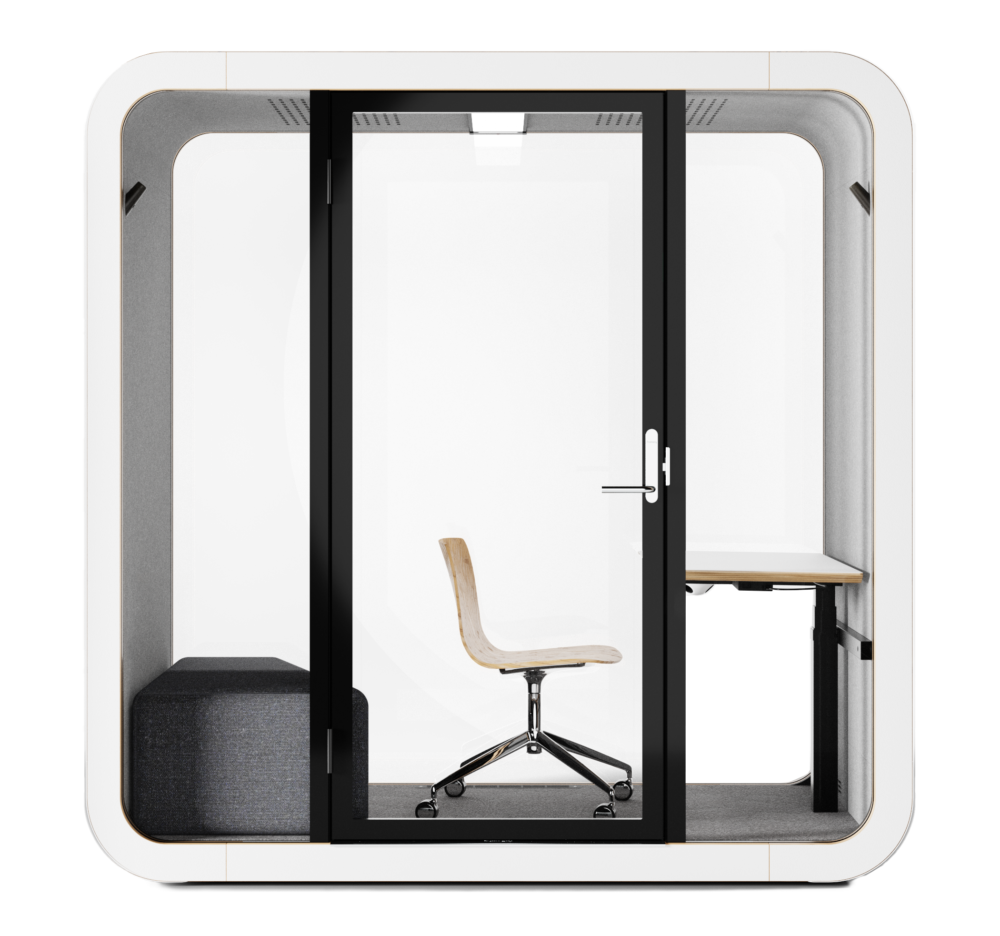 Framery Q Flow. As the name suggests, Q Flow has been designed to meet the needs of today and tomorrow and assists people in achieving that flow-state-of-mind work. As a single-person workstation that unleashes your inner workflow, Q Flow is designed to support flexible work as well as heads-down types of tasks. In addition to all of the features included in the original Framery Q office pod, the Flow model also has a height-adjustable electric table that allows users to change their work position in a matter of seconds. Users can transition from working from their seat to a standing position without throwing off their flow or distributing those around them. 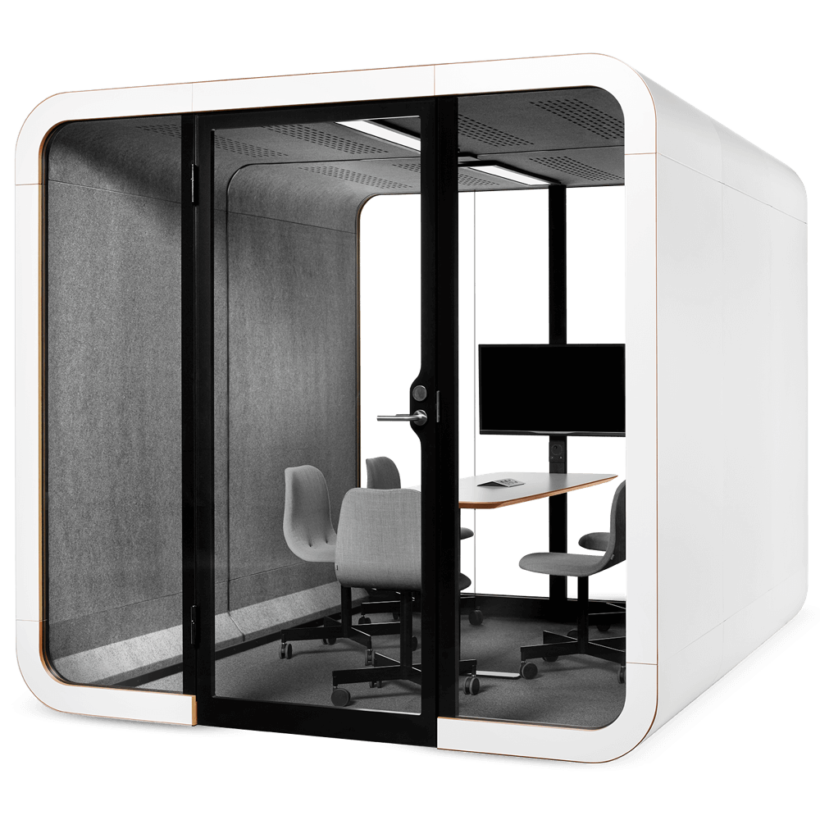 The Framery 2Q meeting pod is designed for 4-6 people, making it the ideal place to co-create, brainstorm and have meetings. Our superior sound insulation system ensures that your meetings won’t disturb the office – and the office noise won’t disturb you. 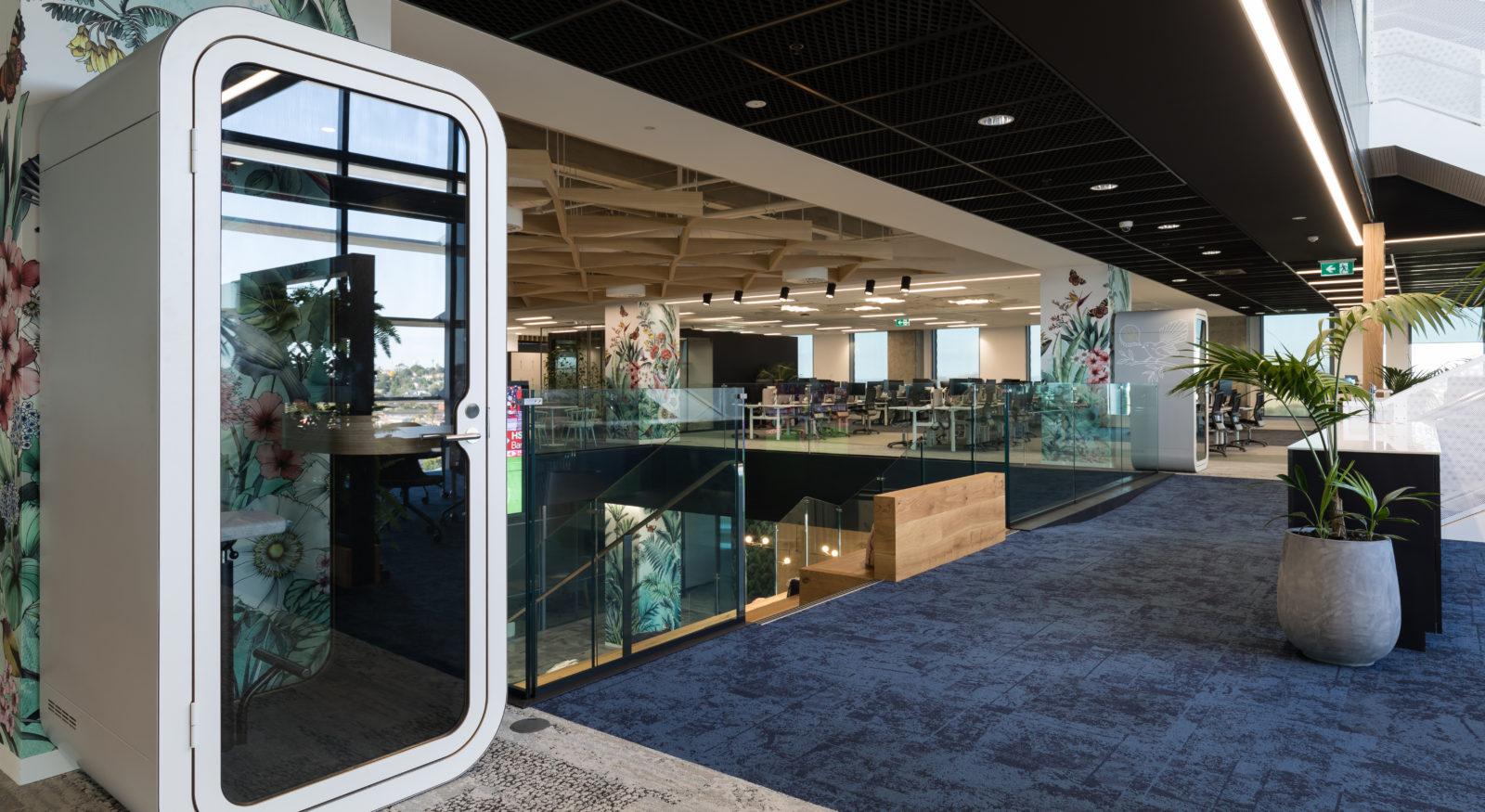 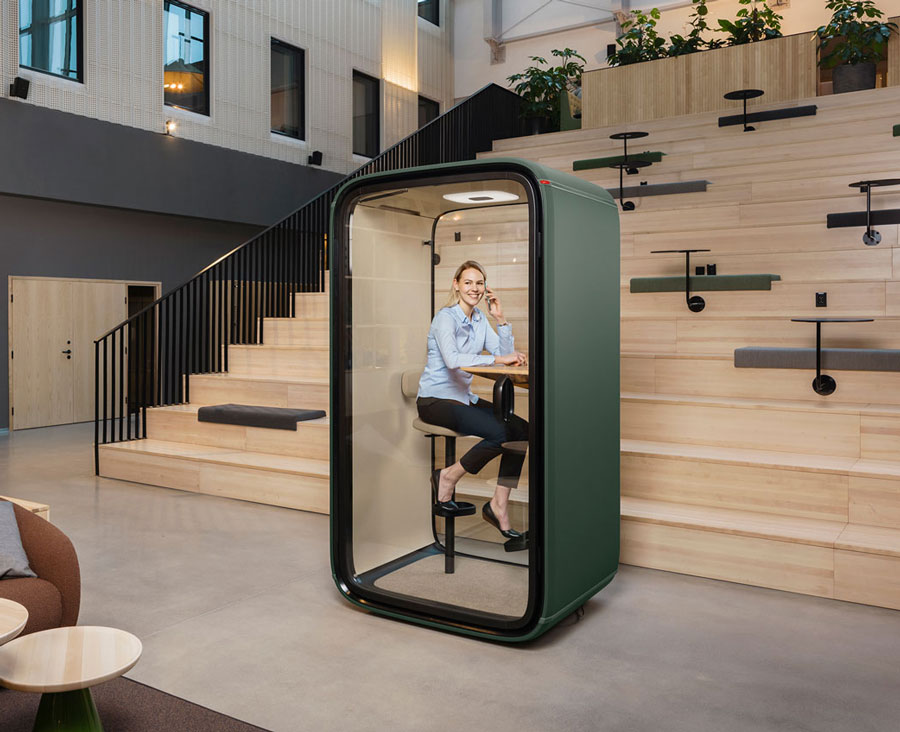